Divcibare, a famous tourist place, is settled on the mountain Maljen, 40 kilometres south-east from Valjevo, and 100 kilometres from Belgrade. It lies on the altitude of 980 metres between Crni vrh (1098metres), Paljba, Golubac and Veliko brdo. Because of its geographical position, it has a great influence of the coastal, Carpathian and Pannonian climate. Mostly because of that, the air abounds with iodine and the climate is mild. Divcibare has, in average, 239 days without wind and 280 days with no precipitation a year. While in the summer the average air temperature is below 22 degrees Celsius, in the winter, Divcibare is abundant with snowfalls and it becomes favourite destination for snow and ski lovers.

New! New! New! At Villa “Marina” you may use vouchers of Ministry of Tourism in the amount of 5.000 RSD for your holiday in Serbia. Find more on homepage.

Name Divcibare occurs for the first time in 1476 in the Turkish census of the Smederevo district. There are numerous legends about the origin of this name, but the most probable one is that it derives from the Slavic word which means „girls’ puddle“. According to the folk tradition as well, this mountain field was named „girls’ puddle” because in ancient times, after the summer downpour, the river “Crna Kamenica” suddenly swollen and took the youngest shepherdess, and so it was named in her memory.

Mountain Maljen spreads from east to west in the length of 30 kilometres south from the city of Valjevo. The highest peak is 1100 meters of altitude. By the end of the 18th century mountains Povlen, Maljen and Suvobor had a common name Karadag or Montenegro. In the 19th century Maljen got its name which literally means “appear”. It is a wooded mountain with many glades, meadows and viewpoints. The highest peaks of Maljen are “Kraljev sto” (1.104masl), “Crni vrh” (1.098masl), “Strazara” (1.061masl), “Golubac” (1.056masl), “Paljba” (1.051masl), “Velika pleca” (1.037masl), “Veliko brdo” (1.036masl), “Vlasovi” (1.033masl) and “Zabalac” (1.011masl). Maljen and other mountains in Valjevo district are rich in ore and represent an ending of the Dinara mountain massif system.

Natural reserve “Zabalac” is located at the source of the river “Bela Kamenica”. Protected species in the area of 11 hectares are: birch trees, beech, and fir, white and black pine.

A large natural reserve covers the area of 29 hectares on the slopes of the peak “Velika pleca” and the dominant species in this area are white pine, birch, beech, oak etc.

“Black river” covers the largest area of 60 hectares. It surrounds the source of the “Black river” and consists of special flora and vegetation combined with the attractive relief elements. 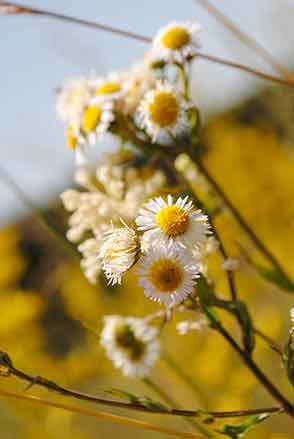 Coniferous forests are of major importance for Maljen. There are white and black pine, fir, spruce, juniper and mountain pine. The most common deciduous trees on Maljen are birch and beech, black and white ash, oak, turkey oak and holly.

Divcibare are known for various types of forests and meadows. Among lots of meadow flowers, in late April grows and blooms the most beautiful flower of the mountain - the narcissus. Distinct characteristic of the plant world is represented by peat-bogs. Maljen is known for the largest peat-bog in Serbia, although peat eco systems are very rare in the whole area of Balkan Peninsula. Peat bogs represent very rich eco-system with almost hundred plant species.

Maljen is also known for a large collection of forest fruits which are commonly used as nutrition: mushrooms, wild strawberries, raspberries and blackberries. The most interesting is blueberry which grows as a bush, mostly in the beech forests.  Also, the mountain is rich with numerous herbs: yarrow, wormwood, nightshade, lemon balm, thyme etc.

The most important representative of wildlife on Maljen is deer. But, you may also find rabbits, squirrels; wild boar has reappeared since its number was significantly reduced, and marten. Among birds, we should point out partridge, colourful woodpecker, rural woodpecker, jay and mountain nightingale.

Divcibare is rich in water. This area abounds in rivers, springs and streams which belong to the basins of the river “Kolubara” and “Zapadna Morava”. The river “Bukovska” flows under the “Golubac” peak runs through the picturesque gorge and connects with the tributary river “Crna reka”. The river “Manastirica” springs under the peak “Kraljev sto” (1103m) and makes a very nice waterfall “Skakalo” with cascades of approximately 20 meters of height. In several places below the eastern side of the peak “Golubac” springs a river “Crna Kamenica” which flows through Divcibare. Two source arms meet in the centre of Divcibare, then proceed together under the market and bakery, and then through the gorge full with rapids and waterfalls, surrounded with beautiful black pines. The river further continues between heights of Maljen, and at “Tometino field”, it connects with the river “Bela Kamenica”, from which arises river “Kamenica” which finally flows into the river “Zapadna Morava”. 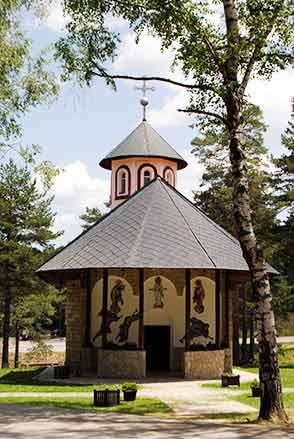 “Black river” emerges from several streams from the north side of Divcibare. Waterfalls of 5-10 meters of height are particularly interesting. Other rivers in this region are: river “Bukovska”, “Kozlica”, “Krcmarska river”, “Manastirica”, “Paklenica” and “Bela Kamenica”. All of them flow through gorges enriching hydrography of this region. Aside from the rivers, this area is rich with many springs. “Zujan” spring is particularly interesting because it is located in a spacious swampy meadow.”Hajducka cesma”, “Cubrica” and “Studenac” are the other known springs. The spring “Studenac” was named after its very cold water. Cold air blows from the cracks, so it is assumed that below the spring there is an entire cave system that has not been discovered yet.

During the year, Divcibare hosts many touristic, cultural and sports events, such as „White Narcissus“, „ Mushroom Days”, “Winter Festival for children’s recreation” and so on.

„Mushroom Days” is held every year in early October. It consists of educational exhibitions of freshly picked, produced or processed mushrooms. Aside from all kinds of mushrooms, visitors have the opportunity to see exhibitions with a proper accompanying literature, journals about mushrooms, as well as the exhibitions of photographs and children’s drawings. There is also a workshop where people discuss about the importance, protection; proper use of mushrooms, medicinal benefits and toxic mushrooms. Also, each day very useful lectures are being held by the most eminent experts about all interesting facts from the world of mushrooms.

A traditional touristic event „White Narcissus” is being held every year in late May. This event consists of various happenings, such as tennis tournament, exhibitions of flowers, beauty pageant, motorcycle collection, etc.

“Winter Festival for children’s recreation” takes place every year in February. Children from Serbia, Montenegro, FYR of Macedonia, Greece, Hungary,Romania and from diaspora participate in this event. Staying in the fresh mountain air on Divcibare is a real opportunity to socialize and to improve the overall psycho-physical and health body conditions. This event offers winter individual and team activities for children.